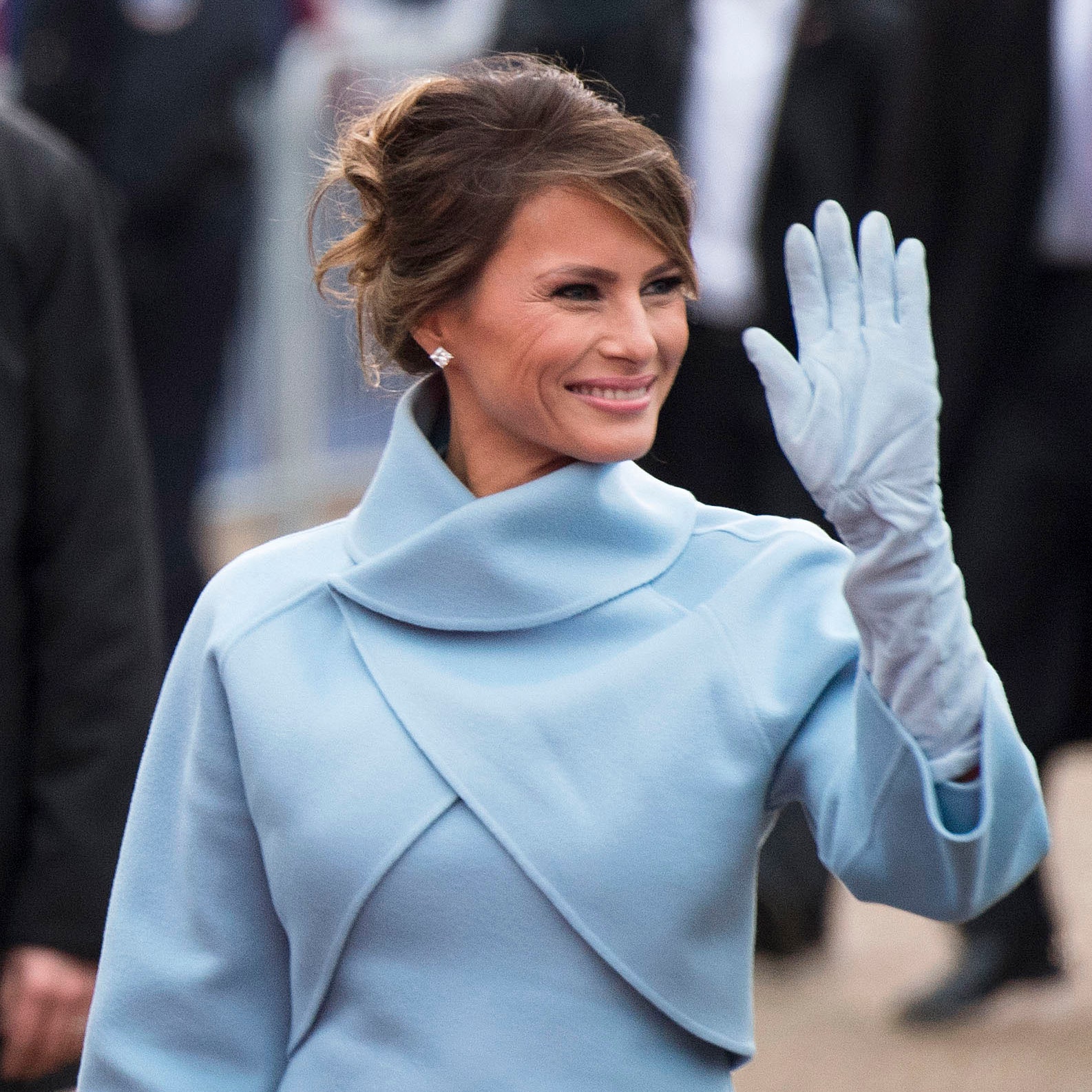 Without a doubt our new First Lady, Melania Trump, and the entire First Family shined over the entire course of the 58th Presidential Inaugural celebrations.  The talented businesswoman, wife, and mother who is fluent in five languages was poised, polished and highlighted her spectacular and most importantly American wardrobe.
Mrs. Trump began the festivities wearing a double-breasted military-inspired coat by Norisol Ferrari, a small, independent New York designer at a wreath-laying ceremony at Arlington National Cemetery.  Later that evening she wore another American designer, Reem Acra also based in New York.  The gown was floor-length and covered in nude colored sequins.

However, the show stopper was without a doubt her powder-blue double-face cashmere dress and coat to the Inauguration Day events, designed by Ralph Lauren.  It was complemented with matching gloves and heels and her hair was swept up beautifully.  “It was important to us to uphold and celebrate the tradition of creating iconic American style for this moment,” Lauren’s company said in a statement.  Lauren is not simply an iconic American designer he has created designs for four previous First Ladies (including Former First Lady Hillary Clinton’s wardrobe to President Trump’s Swearing-In Ceremony), outfitted the U.S. Olympic team and lead the campaign to save the Star-Spangled Banner by donating $13 million dollars to the National Museum of American History.  Mrs. Trump’s look that day prompted immediate comparisons to a Former First Lady and political fashion icon, Mrs. Jacqueline Kennedy Onasis. 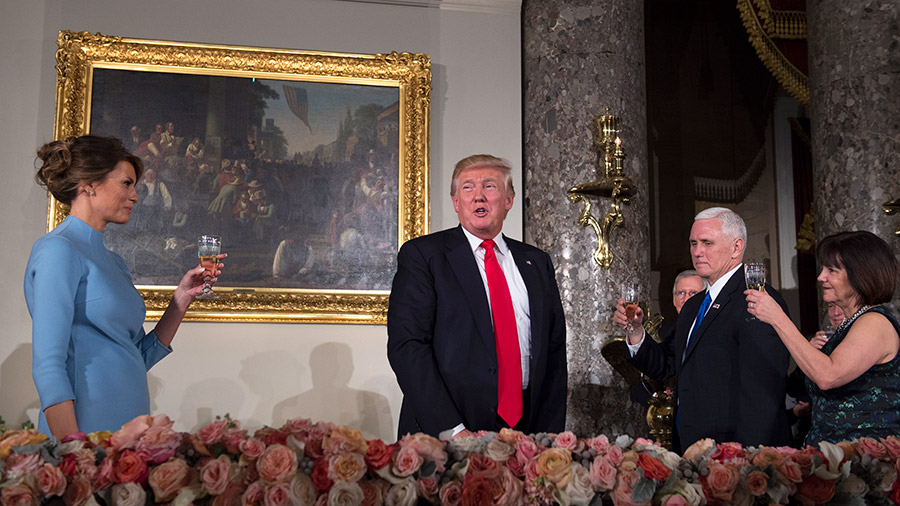 For the piece that will go into history (literally it will end up eventually in the Smithsonian First Ladies exhibit along with other First Ladies Inaugural gowns and other pieces),  Melania Trump reportedly collaborated with New York designer Hervé Pierre (a Frenchman who moved to New York in the early 1990s and was once creative director of Carolina Herrera).  Together, they created an off-the-shoulder white crepe gown that included a thin burgundy ribbon as a belt, it included a high slit and a gazar wave curving from sleeve to hip and then down the skirt.  She was stunning. 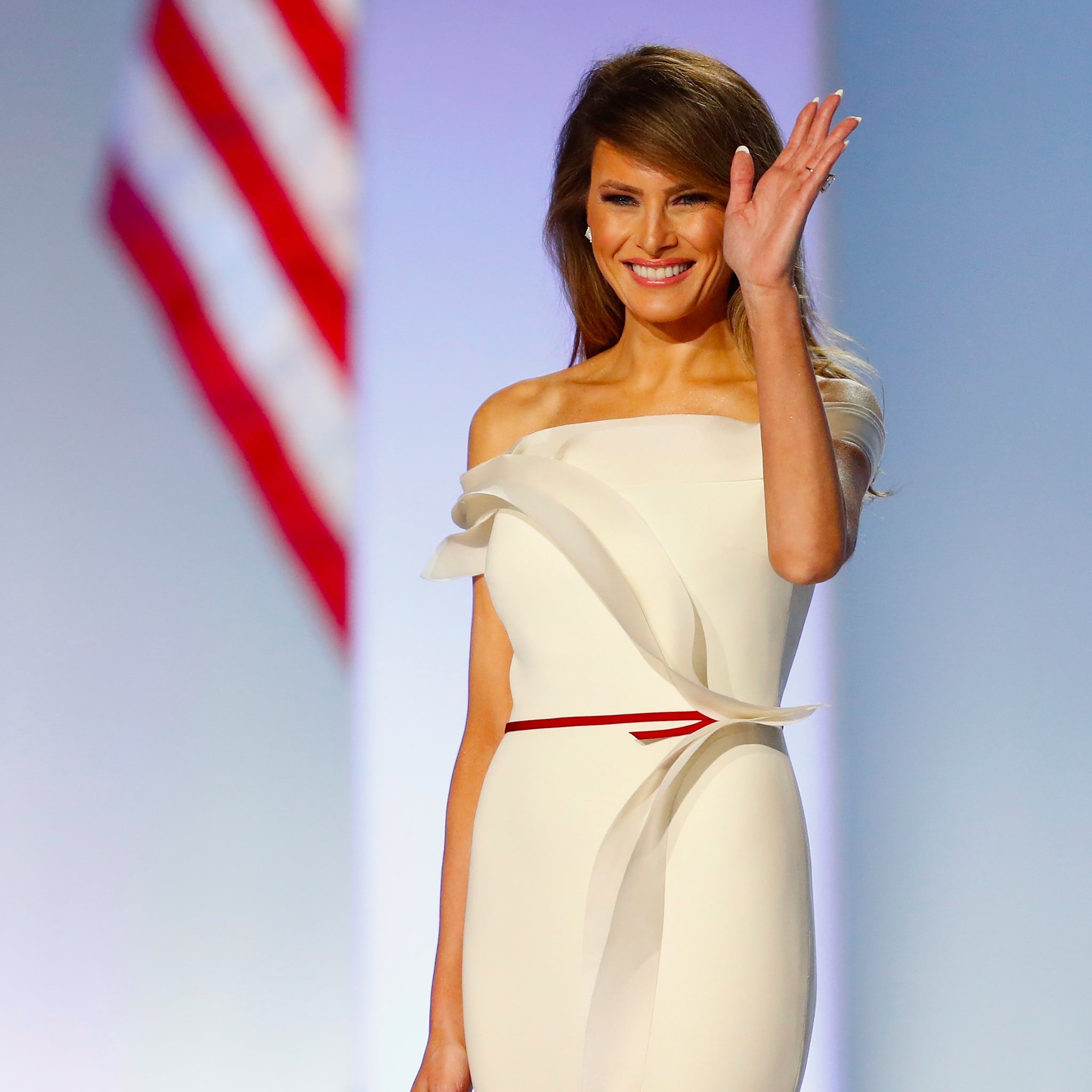 She finished the Inaugural activities at the National Prayer Service at the Washington National Cathedral where the First Lady selected an Alice Roi, another New York designer with a navy cashmere and wool coat that clinched at the waist with a wide navy leather belt. She finished her look with a pair of five-inch patent leather blue Christian Louboutin pumps. There is no doubt that the former fashion model has an eye for fashion and we are all excited to see how she ushers in a modern Reagan/Kennedy style glamour to the White House and Washington, DC as our new First Lady of the United States of America.
@trumpingaural @FLOTUS @realmelaniatrump #FLOTUS #WhiteHouseTraditions #MAGA
SHARE THIS: