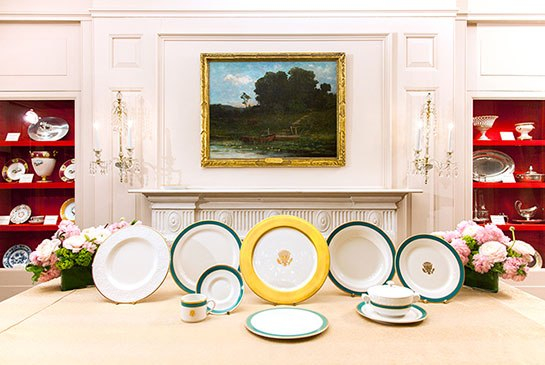 The state china of the Obama Administration has been unveiled! The eleven-piece place setting incorporates historic inspiration with a modern presentation, as, unlike most china, it’s not a matching set. The blue hue used on several of the pieces was named “Kailua Blue”, an acknowledgement to the President’s home state of Hawaii. The set begins and ends with the Presidential seal on both the service plate and the dessert plate. The pinwheels and leaf frond reliefs on the gilded-edge white dinner plate were drawn from Dolly and James Madison’s French Empire porcelain, obtained while Madison was serving as Secretary of State. And a new piece made its first appearance into presidential china, a tureen. This dish can be used for anything from soups to small entrees to desserts. “Mrs. Obama’s main goal was to create a modern service that is completely compatible and interchangeable and usable with all the historic china services” that are used for official entertaining, said William Allman, the White House curator.

During a preview of the new china Mrs. Obama stated “If you’ve seen our state dinners, we really do a lot of mixing and matching — sometimes because we really do not have enough, sometimes because we’re trying to create a new modern, different, edgy kind of look…..This Kailua Blue is one of those colors that will complement some of the other pieces already in the collection in a way that’s elegant, and I think it will be timeless.”

The first administration to design china service solely for presidential use was the Monroe administration in 1817. Over the years, a number of First Ladies, including Eleanor Roosevelt, Lady Bird Johnson, Nancy Reagan, and Laura Bush, have all introduced their own service sets into the state china collection.