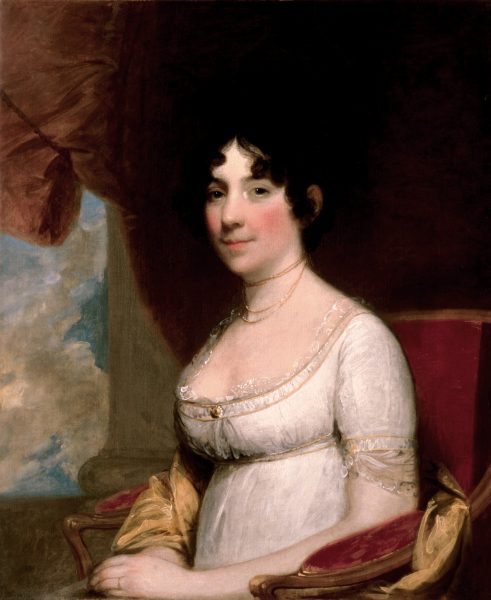 On this day in 1814, the British invaded Washington, DC during the War of 1812. The fire totally destroyed the White House. First Lady Dolley Madison was in the Blue Room of the White House and saw the British ships coming towards the Executive Residence and had the presence of mind and respect for history to preserve as much as she could from the British. She knew they would have no mercy on the home so one of the things she did that day was have staff remove the 1797 replica of the Gilbert Stuart portrait of our first George Washington, our first President of the United States. The full-length portrait of was purchased for $800 14 years before the attack on July 5, 1800. Known for her social events, the White House table was set for a 40-person dinner party the night she was forced to flee.

Here is an excerpt from a letter she wrote December 3, 1814 the event:

“Two hours before the enemy entered the city, I left the house where Mr. Latrobe’s elegant taste had been justly admired, and where you and I had so often wandered together; and on that very day I sent out the silver (nearly all) and velvet curtains and General Washington’s picture, the Cabinet Papers, a few books, and the small clock – left everything else belonging to the public, our own valuable stores of every description, a part of my clothes, and all my servants’ clothes, etc., etc. In short, it would fatigue you to read the list of my losses, or an account of the general dismay or particular distresses of your acquaintance.”

Thousands of visitors come to visit the White House each year for tours and social events and may not realize that the very painting of Washington that hangs inside the East Room is the actual painting that Dolley Madison saved in 1814. In fact, when you walk into the Red Room, over the door leading into the State Dinning Room you will see a portrait of Dolley Madison. If you turn around you will see she is looking through the pocket doors directly at the portrait of George Washington hanging in the East Room. A modern tradition, allowing her to always have her eye on the painting she saved so many years ago.

At a 2007 event honoring the release of the Dolley Madison Gold coin, First Lady Laura Bush said this of Mrs. Madison: “Those red curtains were one of the things Mrs. Madison made sure to save when the British invaded Washington and torched the executive mansion during the War of 1812. In a few minutes, we’ll hear more about Mrs. Madison’s heroism — and the famous story of how she rescued her beloved Gilbert Stuart portrait of George Washington, which of course is still here today in the East Room. This portrait was only 14 years old when she saved it, so it was a new, modern portrait. Mrs. Madison’s bravery in the face of British troops earned her the love and respect of her fellow citizens — and a permanent place in American history. At the end of her career in our nation’s capital, Daniel Webster wrote that Dolley Madison is “the only permanent power in Washington — all others are transient.”

So today, when you are at the White House for a social event or tour, remember this day when you walk in the East Room, Blue Room, and Red Room!