While President Trump has hosted several foreign leaders to the White House, and in New Jersey and Mar-a-Lago for meetings, working lunches, and dinners, the first official State Visit for Trump’s presidency began this past Monday to host French President, Emmanuel Macron. Following the grandeur of the Trump’s recent visit with the Macrons in Paris, and typical protocol for a true State Visit, the Trump Administration made extensive preparations to plan a visit that would graciously welcome their honored guests. 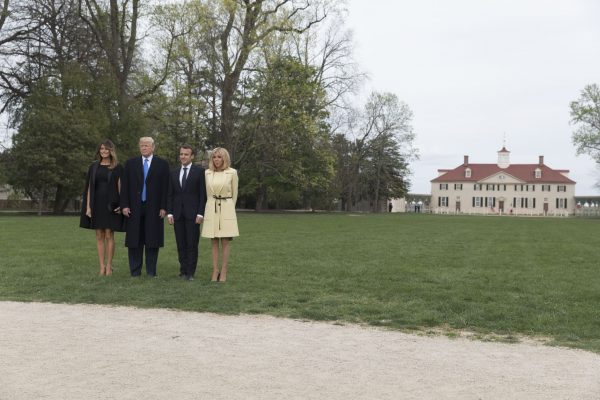 To begin the Macron’s visit, they accompanied the President and Mrs. Trump on a visit to Mount Vernon, the historic home of our first, First Family, for a private dinner. Prior to boarding Marine One for their departure to the Virginia estate, the Trumps received a gift of a European sessile oak, to be planted on the South Lawn from the Macrons. This symbolic tree, at 5 years of age, measured only 4 ½ feet tall, comes from Belleau Wood, a battle site from World War I where more than 9,000 American soldiers died or were injured in battle. As a former veteran himself, retired Marine, Col. William Anderson shared that “something as significant as an oak tree from Belleau Wood, is just remarkable. [It supports] how much they remember, and cherish that memory.” The significance of this gesture was not only apparent to the Trumps, but this first hand veteran account, revealed that the gift carried a great weight for those with an appreciation for French-American History. 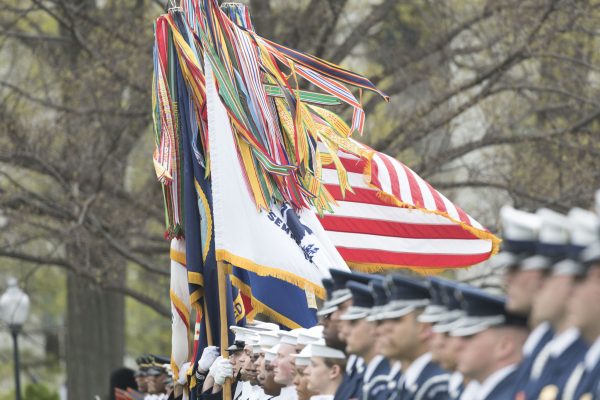 The next morning, following their Mount Vernon visit, the Trumps arranged for the Macrons to be greeted on the South Lawn with full military honors for the official arrival ceremony. This event would continue the nearly 56 year tradition, enacted during the Kennedy Administration, of giving visiting dignitaries the most esteemed greeting. Upon arrival, the U.S. Military bands played the French national anthem, the American national anthem, and finally, the U.S. Army Old Guard Fife and Drum Corps performed a signature march. It was a groundbreaking ceremony marked by a 21-gun salute, a traditional ceremony, typical for an event of this caliber. To complete the welcome, both President Trump and President Macron gave public welcome statements. As these world leaders stood for the public eye at podium’s center, their spouses sent a powerful message by joining their husbands on stage. It was their coordinating white suits that made for a stunning presentation and delivered a powerful message; this was a united front. In the past, it was customary for presidential spouses to be escorted to side, as their husbands addressed the crowd.  But this changes from administration to administration; it was President Carter who was the first to have his wife at his side. This moment set a revolutionary tone for the evening that was to follow. 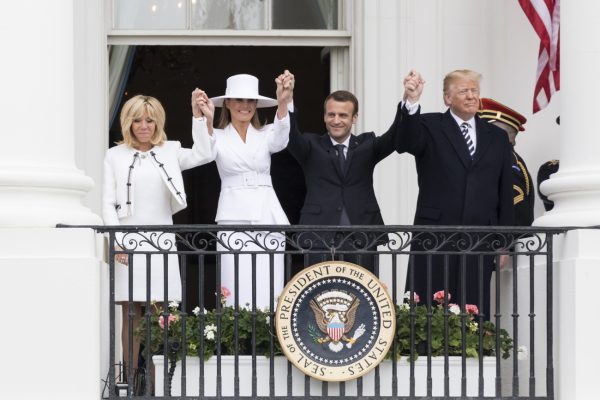 In his welcome remarks, President Trump proceeded to express his gratitude for his French guests as he shared how “truly fitting [it is] that we are holding our first official state visit with the leader of America’s oldest ally, the proud nation of France”.  Additionally, he offered his public prayers to former President George H.W. Bush on the death of the former first lady. Following the brilliant morning of pomp and pageantry, the First Couples separated. President Trump and President Macron were off to attend official bilateral meetings and, as is tradition with State Visits, First Lady Melania Trump hosted Mrs. Macron for a spousal event. 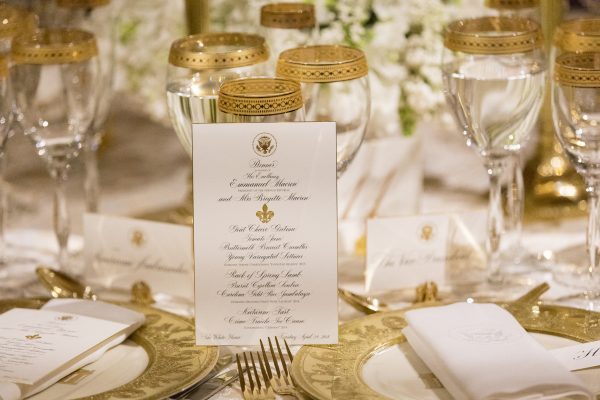 Mrs. Trump choose to escort First Lady Macron to visit the National Gallery of Art in Washington D.C. in the morning. Mrs. Trump and Mrs. Macron were met by Frank Kelly, Deputy Director of the museum.  Mr. Kelly had arranged a tour of the National Gallery of Art, crafted to complement the incredible work of French artists and the long-standing friendship of the United States and France. “Everyone understands the language of art,” said Mrs. Trump, revealing that this ladies’ day was the perfect outing.

Later, Mrs. Trump and Mrs. Macron walked through the East Garden Court, admiring the sculptures originally created for the Théâtre d’Eau grove of Versailles. Mrs. Trump and Mrs. Macron first visited the traveling exhibit of the Cézanne Portraits, a celebration of French culture. Mrs. Trump was elated as this was the “perfect time to have these exquisite paintings in Washington”. Considering Cezanne’s French influence, he launched his art career in none other than Paris, it was a thoughtful tour on which to take the French First Lady. The ladies made another stop to admire the impressionist galleries where Mrs. Trump and Mrs. Macron stopped to admire the work of female American artist, Mary Cassatt. Cassatt who worked amongst numerous French impressionists in Paris, during the 19th century, was another poignant exhibit for Mrs. Trump’s French companion. The pair made a final stop to Leonardo da Vinci’s “Ginevra de’ Benci”—the only painting by him in the Americas.

The crown jewel of the France State visit was, of course, the immaculate State Dinner. In true diplomatic fashion, First Lady Melania Trump had spent months preparing an evening of ambiance and style. Each detail of this evening was carefully selected by the First Lady to ensure the Macrons’ a memorable visit. From menu tastings ten days in advance, to selecting carefully crafted flower arrangements and choosing china patterns, nothing was left to chance.  Mrs. Trump chose a cream and gold color scheme for the dinner, to match the presidential china settings used by Clinton and George W. Bush for their state events. We saw cream tablecloths adorned with delicate floral centerpieces, overflowing of sweet peas and white lilac. These elegant centerpieces were placed in vermeil containers to compliment the handpicked cream fabric used for the tablecloths. The intimate black-tie affair for 123 guests was held in the State Dining Room where both heads of state gave toasts behind the historic gold eagle lectern.

The evening’s menu was a careful study in American cuisine accompanied by hints of French influence. Guests enjoyed a goat cheese gateau with tomato jam and buttermilk biscuit crumbles before moving on to a Cajun-inspired main course of spring lamb and Carolina, gold-rice, jambalaya. Dessert was a nectarine tart with crème fraîche ice cream. This final course was cognizant of the French-American friendship the event was to celebrate. The wine selection for the night was yet another homage to our French ally. The selection included the 2015 Domaine Serene, Chardonnay, “Evenstad Reserve” and The 2014 Domaine Drouhin Pinot Noir, “Laurène”, a name meaning, ‘French soul–Oregon soil.’”

Perhaps the most thoughtful of Mrs. Trump’s preparations was her effort to include the public in the grandeur of the evening. In the past, the press previews for State Dinners were often hastily arranged and poorly executed. They were squeezed in between events, causing for improper coverage. For this occasion, Mrs. Trump made special attention to have the press preview hosted the eve of event. With the room on full display, we were able to gain access to proper coverage and everyone was able to see a glimmer of what the night was to offer. It is with this measure that Mrs. Trump truly revealed herself as a lady of the people.

The President and First Lady greeted the French heads of state in the traditional manner at the White House, at the North Portico before accompanying them, upstairs, to the Yellow Oval Room. As such, it is customary to offer distinguished guests a tour of historically significant rooms throughout the private residence. A tour as intimate as this, was representative of the Trumps’ fully opening their home to their French ally. They then when time arose walked down the Grand Staircase redesigned by President Truman to officially begin the evening and begin the receiving line. Given that both Mrs. Trump and Mrs. Macron are known to be quite fashionable, Mrs. Trump wore Chanel and Mrs. Macron wore Louis Vuitton.

At the conclusion of the evening, the Trumps presented the Macrons with a poignant selection of gifts. This included a framed section of upholstery from one of the chairs in the White House Blue Room. It featured a golden eagle surrounded by laurels, the chair was part of the furniture suite inspired by Pierre-Antoine Bellangé. Bellangé, being a French ébéniste, designed a number of royal palaces in France and created the 53 carved and gilded pieces for the Blue Room, a commission by President James Monroe. Lastly, the Macrons received a special photo album and Tiffany & Co. silver bowl, engraved with the presidential seal and the signatures of both Trumps. It was a meaningful manner in which to end an evening that solidified all of our hopes for the Trump’s first official State Dinner.