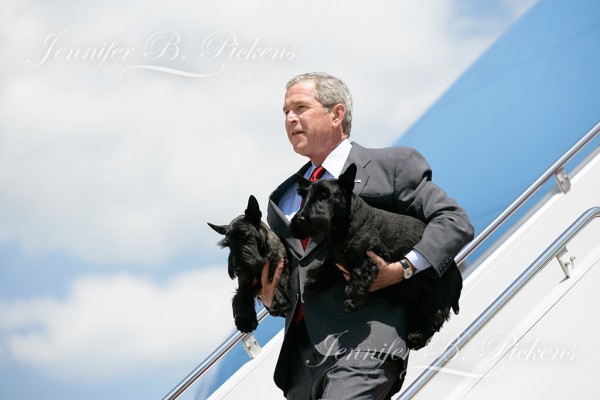 Barney, the former first dog who died last week, is remembered by Times Managing Editor Jimmy Orr, a staffer in George W. Bush’s White House who created the Barney Cam videos that were a Web hit.

Mr. Orr, this is the White House operator.”

As a White House spokesman, I received phone calls like this all the time. But this was the first time the president’s secretary had ordered me to report to the Oval Office immediately. Before 7 a.m. on a Saturday.

It was December 2003. Iraq was all over the news. We were closing in on the capture of Saddam Hussein. But — and the nation should be thankful — this wasn’t my domain.

President George W. Bush had another reason for calling for me now.

Whenever I’m asked to speak about my tenure in the White House, the conversation always shifts to Barney, the Scottish terrier whom the president regarded as the son he never had.

After Barney died Friday at age 12, I found myself thinking about how he became an Internet sensation.

Our first attempt to bring people in to the White House — virtually — was a big hit. Millions of viewers went to our site to see President Bush give a personal video tour of the Oval Office.

During a brainstorming session, my deputy, Jane Cook, mentioned that the theme for the White House Christmas was “All Creatures Great and Small” — a tribute to presidential pets.

People liked our videos. People loved Barney. Why not strap a video camera to the first dog’s head, chase him through the White House so viewers can see the Christmas decorations from his vantage point, and stream it over the Internet?

I decided to pitch the idea at the morning communications meeting in the West Wing, where a couple of dozen communication staffers gather to plan the day.

When Dan Bartlett, counselor to the president, asked me what was on my agenda, I swallowed hard and then said, “As you know, Dan, White House tours are still closed due to terrorist concerns. And the theme for this year’s Christmas at the White House is ‘All Creatures Great and Small.’

“So it’s only logical that we have a Barney Cam, Dan, which is where we strap a video camera on Barney’s head and have him run through the White House looking at decorations while Christmas music is playing in the background.”

Dan looked at me as though I’d grown another head.

After about 10 seconds of dead silence, Press Secretary Ari Fleischer chimed in: “That. Is. Awesome.”

His validation was all it took.

There was one problem. I had fully expected to be turned down. What I had was an idea, not a plan.

“Mrs. Bush loves Barney Cam,” she said. “She’s going to show the video at the children’s hospital instead of reading a Christmas book for the kids.”

“Whoa, Noelia!” I said, beginning to feel panicky. “This is just a theory!”

The first lady was there. Live. Talking about the holiday decorations at the White House. Then she mentioned that she would be introducing a cute video starring her dog Barney at the hospital in two weeks.

“Get it together,” Noelia said.

We were able to secure a lipstick-size camera to attach to Barney’s collar. But Barney didn’t wear a dog collar. He didn’t need to. Some dogs have microchips. Barney had the Secret Service.

When we put a collar on Barney, he protested by lying down. Then he started howling, loudly.

This would make a pretty lousy holiday video.

A colleague reassured me: “Don’t worry about it. Barney will get used to it. He’ll tire after a while, and then we’ll start shooting.”

“The president loves Barney like a son,” Haney said. “He hears Barney howling like that, he’s gonna think you’re torturing him.”

The last thing I needed was for the leader of the free world to think I was torturing his dog. We removed the collar.

Instead, we just had a couple of people chase Barney around the White House on their knees with a video camera to get the right perspective. That included going out in the snow. Numerous times. I would have done it, of course, but I was the director.

‘I can’t believe we’re airing this’

The video was just Barney running through the White House chasing a big red ornament and stopping in all the major rooms to look up at the decorations. The soundtrack was Christmas music.

At about the four-minute mark on CNN, the newscaster said, “I can’t believe we’re airing this.” I had to nod in agreement.

We put the video on the White House website, and the traffic was so huge it brought the site down briefly. That week, the video was downloaded 600,000 times. This was in 2002. Pre-YouTube. And pre-mass broadband. If you wanted to watch the video, you had to have patience.

In fall 2003, White House colleagues began coming to me, asking what we would do for a Barney Cam encore. We knew we had to do a sequel and had already named it. “Barney Cam II: Barney Reloaded.”

One problem. We had no plot. But just as in Hollywood, that was inconsequential.

Eventually my friend Bob DeServi (another White House communications staffer) and I came up with one. The New York Times noted: “The plot of the video is more complex than last year’s video, which had no plot.” It was a cliffhanger, actually. Barney was ordered by Chief of Staff Andrew Card to put up the holiday decorations, but Barney preferred to play with his ball.

This year, everyone wanted a part. After the previous success of Barney Cam, as well as the White House video tours, there was great demand to appear in the video. I remember talking to Bartlett, telling him that, to make the sequel complete, we really needed the president.

“The president has a lot on his plate,” Bartlett said. “Iraq, Saddam Hussein, the economy. I’m not going to ask him.”

Saturday morning at 6:30 a.m., I was awakened by the phone call.

Ashley Estes, the president’s secretary, said: “No, it’s fine. The president needs you to come in right away.”

Blake came up to me and said, “Jimmy, would you like to brief the president?”

I had always thought that if this were to happen, the topic would be a little more glamorous. Maybe like national security. But I’d take this.

“Barney has been ordered by the White House chief of staff to put up the holiday decorations, but he’d rather play with his ball. If you could lecture Barney about the importance of hard work, that would be great, sir.”

The president nodded and said, “Yeah, I can do that.”

We put a lavalier microphone on the president and began recording. On his way out, he was getting into his role, saying, “Oh yeah, I can do this.”

The president gave a performance that can only be described as masterful.

Pointing to his office, he said: “Barney, this here’s the Oval Office. This is where I do my job, Barney. And when the chief of staff gives you a job to do, you do the job, Barney.”

He was out there for 20 minutes lecturing Barney. I was having an out-of-body experience.

Blake told me during the filming that the president needed this. “It was a welcome break,” he said.

One week later, the president would announce that Saddam Hussein had been captured.

The first lady unveiled the video at the children’s hospital. There was tremendous news coverage of this event, with news networks breaking into their regular coverage to air it live. One network even had a banner that read: “Breaking: ‘Barney Cam 2’ released.”

Now President Obama‘s dog, Bo, has his own Christmas videos.

But Barney was the first. He let Americans, and the president, forget their problems, if only for a little while.