Pets at the White House

50 YEARS OF PRESIDENTS AND THEIR PETS 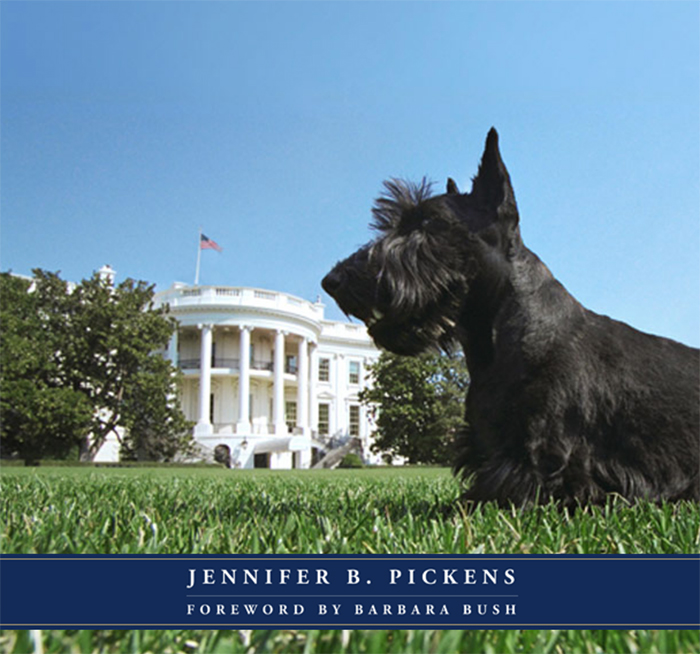 Pets at the White House, the second book from White House social expert Jennifer Pickens, is a spectacular view into one of the most historic homes in the world and all of its four-legged, beaked, and pawed inhabitants. With charm, wit, and compelling photographs, Pickens reveals how pets have played an important role at 1600 Pennsylvania Avenue throughout the decades, not only by providing companionship to the Presidents and their families, but also by humanizing and softening their political images.

Fondly written with charm and wit, and illustrated with over 200 exquisite photographs, the author reveals how pets have played an important role in the White House. Throughout the decades, pets have not only provided companionship to the Presidents and their families, but have humanized and softened their political images through the unconditional love they bestow on their owners.

Pets at the White House 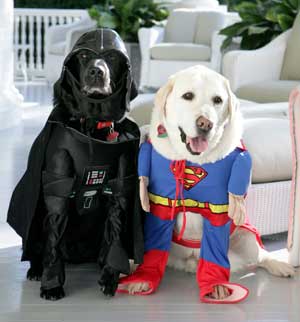 Pets at the White House provides a spectacular view into one of the most historic homes in the world and all of its four-legged, beaked, and pawed inhabitants—from ponies, puppies, and cats to parakeets, sheep, and even an alligator. 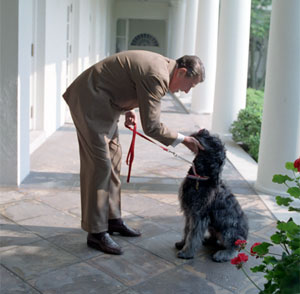 Interest in presidential pets has risen with the importance, power, and prestige of the American presidency.  The American public has an insatiable appetite for stories of everyday life in the White House, and the media obliges with increased coverage of 1600 Pennsylvania Avenue and the pets that reside there.

This book brings it all to life.

With charm, wit, and compelling photographs, author Jennifer Pickens reveals how pets have played an important role in the White House throughout the decades, not only by providing companionship to the presidents and their families, but also by humanizing and softening their political images.  The book starts with the Kennedy family and their menagerie of pets and continues through 10 administrations and more than half of a century to the Obama family and First Dog Bo.    Throughout the pages are more than 200 exquisite photographs—images of presidents with their pets in quiet moments as well as more animated times of play—most of which have never been seen before.Pickens documents the lives of the most famous White House pets through fascinating and little-known anecdotes.  One such story involves the Soviet Prime Minister, who gave young Caroline Kennedy a puppy, which had to be put through a battery of tests in search of hidden listening devices and bombs.  There’s also the story of President Ford getting locked out of the White House when he took out his very pregnant dog Liberty in the middle of the night.  Another heart-warming tale:the custom birthing box created by White House carpenters for Millie while she was pregnant with presidential puppies during the first Bush Administration.  President George W. Bush’s Scottish terrier, Barney, became a celebrity in his own right, appearing in more than 10 films while he was at the White House.  And, most recently, President Obama made good on his promise to give his daughters a puppy, so they welcomed Bo, a Portuguese water dog, to the White House.

Bo’s favorite food is tomatoes, by the way. 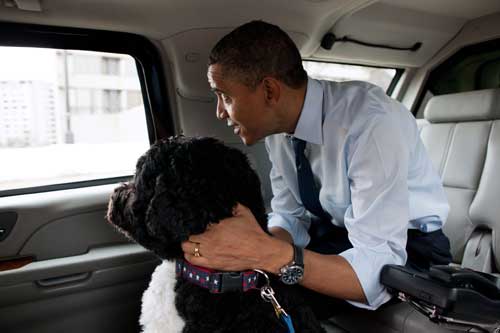 With a foreword by First Lady Barbara Bush, this book has earned the devotion of the recent United States First Families, many of whom penned a unique quote for their chapters.  This poignant collection of stories and photographs is a must-have for pet lovers and lovers of American history alike. 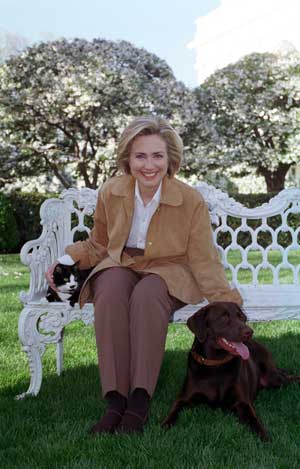 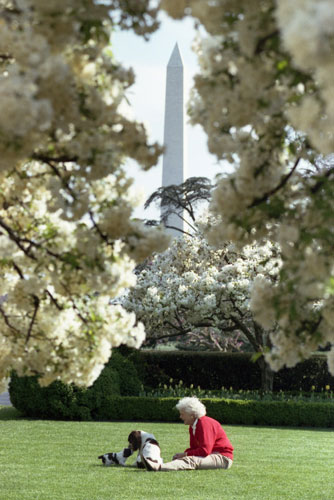 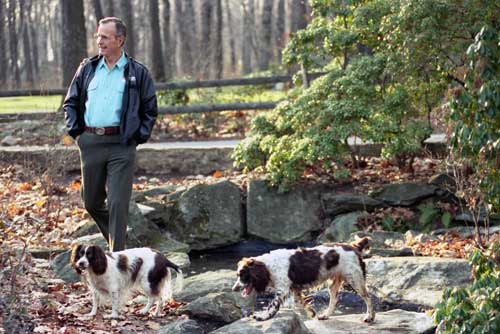 Pets at the White House: 50 Years of Presidents and Their Pets

Five Stars (out of Five)

In Pets at the White House, Jennifer Boswell Pickens offers a delightful series of anecdotes and photographs of our nation’s First Pets, creating an endearing volume that will appeal to animal lovers and presidential theorist alike.

Although her account officially starts with the Kennedy years, Pickens also provides background details on the animals kept by earlier presidents, from Washington’s donkeys to Zachary Taylor’s horse, which was often, spotted grazing on the White House lawn.  From President Taft’s cow, Pauline Wayne to Tad Lincoln’s turkey, a forerunner of the annual Thanksgiving pardoned turkey, seemingly no animal has been overlooked.  Pickens shares both legends and documented tales of astounding variety of animals that have made their homes with our nation’s First Families.  She reveals details about pets whose presence helped humanize presidential hopefuls and ensure election, and those whose constant companionship became part of their owner’s public images.

“If you want a friend in Washington, get at dog,” President Truman famously commented.  Pickens agrees.  Her theory that “Animals have played a role in forming perceptions of the character and personalities of our Presidents” is supported by both the stories and the photographs she includes in her book.  The Kennedy family’s “menagerie of animals, ranging from dogs, cats, birds, and hamsters to ponies, parakeets, ducks and more,” for instance, is iconic.  Few who remember the early 1960’s are unfamiliar with photos of Caroline sitting atop her pony, Macaroni.  Perhaps less familiar are the Kennedy’s dogs and Jacqueline Kennedy’s essay contest, the winners of which received puppies from a litter those dogs produced. Similar tales about other First Families provided more charming and warm-hearted particulars that reveal the often hidden personalities of the many famous people who have occupied the White House.

That the Nixon family’s poodle ate some of the fist from Lady Bird Johnson’s small goldfish pond or that the Ford family’s cat did not like Henry Kissinger are not matters of great national import, but they certainly are entertaining details, and readers are invited to draw their own conclusions about their significance.  Whether President Reagan’s Cavalier King Charles Spaniel, Rex, was political asset some claim, “helping him dodge questions from the press,” does not even matter.  The fact that Rex reacted to the rumoured ghost in the Lincoln Bedroom and received a substantial fan mail from the public is far more telling.

George and Barbara Bush’s dog Millie wrote her own book and raised more than a million dollars for literacy causes, and the Clinton’s cat Socks not only had his own books, but also starred on the White House’s web page.  No one believes that either Millie or Socks actually wrote anything, yet people relate to the famous pets much as they do to their own less-celebrated special friends.  America is a pet-friendly nation whose citizens seem to expect their leaders to share their love of animals.

Pickens has created a delightful book.  Its photos, many taken by White House staff photographers, are wonderful, and the accompanying text, although brief, is revelatory and entertaining.  Pets at the White House is sure to be enjoyed by America’s millions of pet lovers and appreciate by those who follow the lives of nation’s First Families. 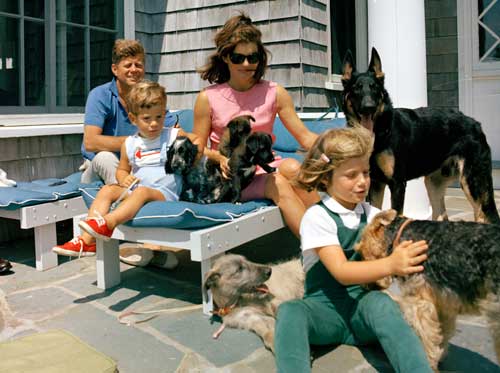 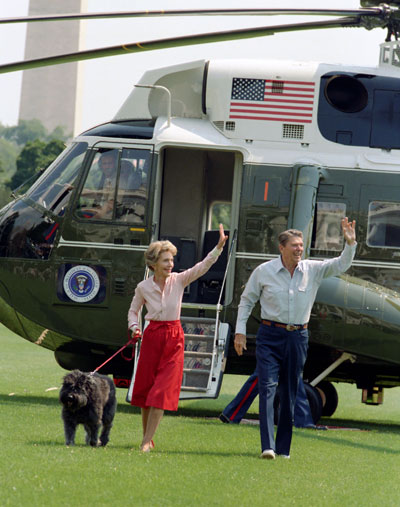 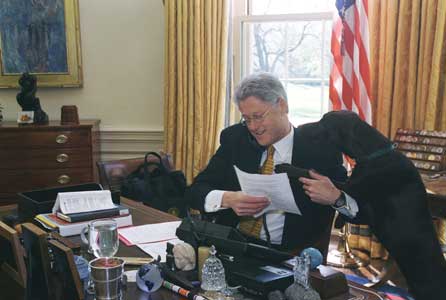